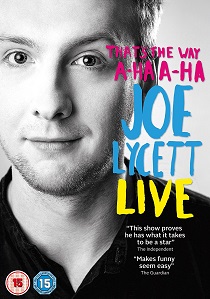 Whether it's bringing down email scams, battling rude sales assistants or fighting that infamous parking fine, That's The Way, A-Ha, A-Ha, Joe Lycett, which Joe took on an 80-date sell-out UK tour this year, sees the comic face everyday injustices we can all relate to. Joe delivers his quick wit with a razor sharp tongue and a hilariously unique use of the English language, cementing his place as the rising star in British comedy.

Joe said: "To be honest I suggested the title of this show as a joke and still can't believe they've actually gone through with it. Regardless I am absolutely effervescent with excitement that the most fun I've ever had is going to be released for others to enjoy at home!"

Star of Live at the Apollo, 8 Out of 10 Cats Does Countdown and Sunday Night at the Palladium, Joe's effortless charm and acerbic humour has drawn a huge following since his debut in 2008, including two sell-out UK tours. In 2012 Joe performed his hotly anticipated debut show Some Lycett Hot at the Edinburgh Fringe and secured a Foster's Edinburgh Comedy Award Best Newcomer nomination. He returned to Edinburgh in 2015 with sell-out show That's The Way, A-Ha, A-Ha, Joe Lycett, scooping the Chortle Award for Best Show. He hosts Radio 4's It's Not What You Know and will soon be seen in Sky's The Big Spell. A clip of his appearance on 8 Out of 10 Cats Does Countdown discussing his fight against a parking fine has been viewed over 20 million times online, one of several to go viral.

See what all the fuss is about when That's The Way, A-Ha, A-Ha, Joe Lycett comes to DVD and Digital Download 21st November 2016.

UHD
From the acclaimed director of fan-favourites such as Baby Driver, Shaun of the Dead and The World's End comes the tribute to 1960s London in Last Night In Soho, available to own on DVD, Blu-ray and 4K UHD 31st January 2022 ... END_OF_DOCUMENT_TOKEN_TO_BE_REPLACED
Top PicksView