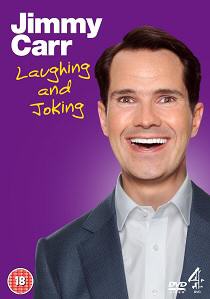 That's Jimmy Carr on a stage, laughing & joking. This is how it works when you're a stand-up comedian. And this is a press release for his new DVD, Jimmy Carr - Laughing & Joking released on 18th November 2013 courtesy of Channel 4 DVD, which is also Jimmy on a stage laughing & joking but now available for you to watch wherever you please.

Bed-sit, dungeon, first-class carriage, knock yourself out. Jimmy doesn't judge. Well, he does, but that's just him laughing and joking again (probably on a stage, although he also likes a meet and greet) It's all on the DVD. But if you can't wait, here's a taster of some of the funnies in store. Plus some handy Jimmy facts to help you look well informed.

Here are some jokes:

Laughing & Joking is Jimmy's 8th live stand-up DVD. To date he has sold over 1.3million DVDs. Jimmy has performed live to over 1.5 million people. And he's on the road again this autumn with his latest tour, Gagging Order. Previous Jimmy stand-up tours include: Public Display of Affection; Off The Telly; Gag Reflex; Repeat Offender; Joke Technician; Rapier Wit; Laughter Therapy.

BD
A stellar cast sizzles in Heat, a taut psychological drama about an obsessive detective and a brilliant thief whose fates are linked in the aftermath of a high-stakes securities heist, released on 4K UHD 8th August 2022 from ... END_OF_DOCUMENT_TOKEN_TO_BE_REPLACED
Top PicksView