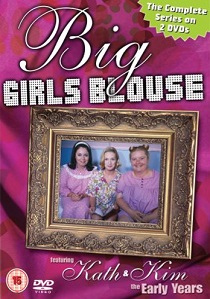 Written by, produced by and starring Jane Turner (Prisoner), Gina Riley (The Bob Downe Show) and Magda Szubanski (The Golden Compass; Babe) - better known as Kath, Kim and their neighbour Sharon from the hilarious Kath & Kim show - Big Girl's Blouse, is released on DVD by Starz Home Entertainment on 29th October 2007 for the first time ever in the UK as a two-disc release featuring all eight episodes of this hugely successful Australian comedy TV series.

Best known as the series through which TV viewers were first introduced to the characters from Kath & Kim, Big Girl's Blouse is a must-see sketch series for every comedy fan. An antipodean cross between Little Britain and Smack The Pony, the show is a clever mix of satire, slapstick and farce, bringing together a host of comical characters in hysterically funny situations.

Series regulars include: The Order of Saint Gary, a group of nuns dedicated to the worship of Australian actor and heartthrob Gary Sweet; the pseudo-arty interpretive dance group, The Corallee Hollow Dance Company; the outrageous drag queen presenters of community access TV show, 'What A Drag' with their catchphrase 'Oh, for Streisand's sake'; and the bigoted, self-obsessed, middle-class 'kept women', the Midweek Ladies. Then there's Claire, the bitchy editor of the incessantly libellous tabloid rag, Big Girl's Blouse, who is constantly looking to dish the celebrity dirt, and the fantastically retro TV show 'Girl's Talk' with Patty 'Wow, I'm freaking out' Slacker with its merciless take on Australia's 1960s-era conventionality.

Other highlights include an investigative news report that asks why ordinary, everyday women are compelled to stalk and ravage Michael Douglas, Liza Minnelli and Katherine Hepburn's jaw-dropping interpretation of Monty Python's famous Parrot Sketch, and Marilyn Monroe's ill-fated warnings to the unwary in Marilyn In An Emergency.

Of course, for comedy fans, the main attraction of Big Girl's Blouse and what makes this an unmissable DVD release, is the Early Years of Kath and Kim, serialised here as Kath and Kim - The Wedding, in which the fraught build up to the big day is presented in deliciously cringe-worthy detail.

UHD
Based on the global blockbuster videogame franchise from Sega, Sonic The Hedgehog, released on DVD, Blu-ray and 4K UHD from 8th June 2020 from Paramount Home Entertainment, tells the story of the ... END_OF_DOCUMENT_TOKEN_TO_BE_REPLACED
Top PicksView