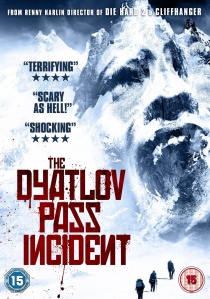 Based on the bizarre but true events surrounding the mysterious deaths of nine ski hikers who went missing in the Ural Mountains in 1959, The Blair Witch Project meets The Descent by way of The X Files in The Dyatlov Pass Incident, the unnerving supernatural shocker from Renny Harlin, the director of Die Hard 2 and Deep Blue Sea, is released on DVD and Blu-ray by Anchor Bay Entertainment on 26th August 2013.

In February 1959, nine ski hikers went missing in a remote area of the Ural Mountains in Russia. Two weeks later all nine were found dead, half dressed and hundreds of yards from their camp, their bodies giving off high levels of radiation and bearing severe internal injuries, including broken ribs and fractured skulls, but showing no discernible external wounds or any signs of a struggle. Their deaths have remained a mystery, with rumours attributing the incident to everything from alien encounters, government conspiracies and the supernatural.

Now, five American college students are hoping to solve the mystery of what has become known as the Dyatlov Pass Incident by retracing the steps of the original ill-fated expedition and documenting their findings on film. But what they are about to discover in the remote, icy wastes will prove to be more shocking and unexpected that anything they could possibly have imagined.

HotBD
Two of Britain's most notorious brothers The Krays were taken on by another famous pair of siblings The Kemps in Peter Medak's big screen gangster biopic set for a Limited Edition Blu-ray release from Second Sight Films on 12th July 2021. END_OF_DOCUMENT_TOKEN_TO_BE_REPLACED
Top PicksView