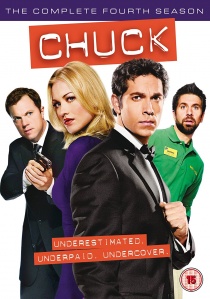 Computer geek by day. Government operative by night. Chuck, the world's nerdiest secret agent is back geekier than ever when Chuck - Season 4 comes to DVD on 3rd October 2011, courtesy of Warner Home Video.

The action-comedy series follows Chuck Bartowski (Zachary Levi - Tangled), a regular guy and computer geek turned secret agent who unwittingly downloads the Intersect into his head - a database filled with highly classified government information - and quickly becomes the government's most vital secret. Assigned to protect him is John Casey (Adam Baldwin - Full Metal Jacket, Independence Day), of the NSA and superspy Sarah Walker (Yvonne Strahovski - The Canyon), the CIA's top agent and Chuck's dream girl. He must now confront terrifying assassins and international terrorists, leaving the fate of mankind in his unlikely hands.

With his new Intersect abilities - Chuck is fully equipped with deadly fighting skills and ready to face the Ring. Now that Chuck's secret is known to those closest to him - his best buddy, Morgan Grimes (Joshua Gomez - Without a Trace); his ever-supportive sister, Ellie (Sarah Lancaster - Catch Me If You Can, Living with the Enemy); and Ellie's handsome and good-natured husband, Devon Woodcomb aka Captain Awesome (Ryan McPartlin - Living with Fran) - Chuck must try harder than ever to keep his spy-life from interfering with his personal life.

Join Chuck's desperate attempt to save Sarah's life through enlisting the help of arch-nemesis Alexei Volkoff, find his long-lost mum and protect the Intersect with this year's best action-comedy television box-set, Chuck season 4 comes to DVD on 3rd October.

HotDVDBD3D-BDUHD
The producers of Godzilla reimagine the origins of one the most powerful monster myths of all in Kong: Skull Island, released on DVD, Blu-ray, 3D Blu-ray and UHD on 24th July 2017 from Warner Home Video. END_OF_DOCUMENT_TOKEN_TO_BE_REPLACED
Top PicksView