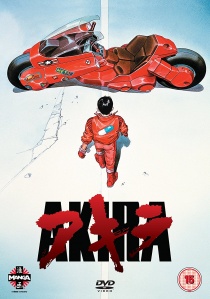 News
News Article Go back to homepage
To coincide with the company's 20th anniversary celebrations, 27th June 2011 sees Manga Entertainment releasing on Blu-ray, for the first time ever, the movie that started it all and defined the Manga brand as the world's leading anime distributor - Katsuhiro Otomo's classic Akira.
Jonathan Sherr, Shelly
Manga Entertainment
Unknown
27/06/2011
Thank you for supporting DVD365.net when you order using the link(s) below. As an Amazon Associate we earn from qualifying purchases
Buy DVD
Buy DVD
Information

To coincide with the company's 20th anniversary celebrations, in June 2011 Manga Entertainment will be releasing on Blu-ray, for the first time ever, the movie that started it all and defined the Manga brand as the world's leading anime distributor - Katsuhiro Otomo's classic Akira! Prior to the Blu-ray release, the film will also open at selected UK cinemas, giving fans the chance to see this "lavish animation extravaganza" (Variety) in all its big screen glory.

Universally acclaimed as one of the greatest anime features of all time and hailed as "a visionary, game-changing masterpiece" (News of the World), the film has been digitally restored and remastered in full HD with super dynamic "Hypersonic" audio especially for this long-awaited Blu-ray release. Acknowledged as a hugely influential and genre-defining anime, this is Akira as never seen or heard before. An unmissable treat for its established legion of admirers, this release is set to introduce Otomo's masterpiece to a whole new generation of film fans.

Neo-Tokyo, 2019. The city is being rebuilt following the devastation of World War III. Kaneda and Tetsuo, two high school dropouts, stumble upon a secret government project to develop a new form of weaponry - telekinetic humans. Tetsuo learns of the existence of his 'peer', Akira, the project's most powerful subject, and determines to challenge him...

"A remarkable technical achievement in every respect" (Variety) and packed from start to finish with "scintillating animated visuals" (Empire), Akira "moves with such kinetic energy that you'll be hanging on for dear life" (Washington Post) and remains, 20 years on from its first UK release, "a landmark production that can be watched with equal satisfaction as a metaphorical psychodrama or as a sheer visual spectacular" (The Onion).

Akira will open at selected UK cinemas on 17th June 2011 and will be released on Blu-ray and DVD on 27th June 2011. A special limited edition collectors' SteelBook containing both the DVD and the Blu-ray disc will also be available from 27th June.