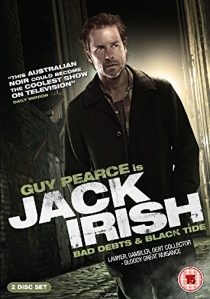 Arrow Films is pleased to bring the UK its very first taste of Aussie Noir in the form of the Guy Pearce fronted 2-part film thriller Jack Irish - Bad Debts & Black Tide, which will be released on DVD on 28th January 2013.

Adapted from the first two books of Peter Temple's best selling series, Bad Debts & Black Tide tells the story of Jack Irish, a former criminal lawyer whose world imploded after the death of his wife.

An expert in finding those who don't want to be found, dead or alive, Jack helps out his mates while avoiding the past .. that is until the past finds him.

A phone message from an ex-client, Danny McKillop, doesn't ring any bells for Jack .. Life is hard enough without having to dredge up old problems; his beloved football team has moved interstate, the odds on his latest bet at the track seem far too long and he's still cooking for one. But then Danny turns up dead and Jack is forced to take a walk back into a dark and dangerous past.

Jack Irish has no shortage of friends, but family members are few and far between. His wife was murdered by an ex-client and his father is a fading photo on the pub's football 'wall of fame'. So when Des Connors, the last link to his dad, calls to ask for help in the matter of a missing son, Jack is more than happy to lend a hand. But sometimes prodigal sons go missing for a reason... As Jack begins to dig, he discovers that Gary Connors was a man with something to hide and his friends are people with yet darker and even more deadly secrets.

HotDVDBD3D-BDUHD
The producers of Godzilla reimagine the origins of one the most powerful monster myths of all in Kong: Skull Island, released on DVD, Blu-ray, 3D Blu-ray and UHD on 24th July 2017 from Warner Home Video. END_OF_DOCUMENT_TOKEN_TO_BE_REPLACED
Top PicksView