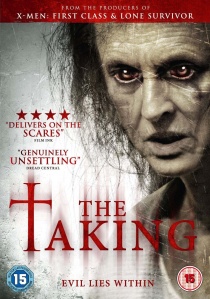 In order to complete her medical PhD thesis, Mia Medina and her team record the everyday life of Deborah Logan (Jill Larson, Shutter Island), an elderly Alzheimer's sufferer trapped in her secluded home by the woods in Virginia.

However as the study progresses, Deborah's activity becomes more and more abnormal. The video captured rapidly transforms into terrifying evidence of the hair-raising occurrences that start to plague Mia and the crew. When inexplicable events and increasingly deadly circumstances reach an intolerable point, panic ensues.

With the ever more disturbing footage and Deborah taking a malevolent turn, it quickly becomes sinisterly apparent that a horrifying evil far worse than the debilitating disease has taken control of her.

The documentary-style horror The Taking is released on DVD by Kaleidoscope Home Entertainment on 28th December 2015.