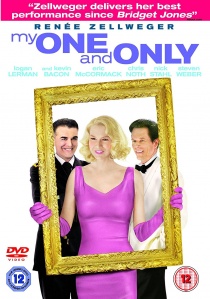 Academy Award® winner Renee Zellweger returns is this rollercoaster road trip, in which the glamourous Ann Deveraux leaves her philandering husband (Kevin Bacon) and takes to the road in her baby-blue Cadillac in search of a new father for her two young boys, George and Robbie.

At first their trip is something of an adventure for everyone involved, but the harder Ann searches for a suitable mate the more she realizes that true gentlemen are a dying breed. Son George tells the story of their cross-country misadventures all the way to the promised land of Hollywood with love, compassion, humor and insight.

Released by Entertainment in Video on Rental, Retail DVD and Blu-Ray on 24th January 2011, My One and Only by Emmy-winning director Richard Loncraine (Wimbledon, Richard III) and starring Renée Zellweger (Bridget Jones Diary, Cold Mountain and Chicago), Kevin BacoN (Frost/Nixon, Mystic River), Logan Lerman (Percy Jackson and The Lightning Thief, 3:10 to Yuma) and Chris Noth (Sex and the City, The Good Wife), is inspired by incidents in the life of actor and Hollywood icon George Hamilton.

BD
You ever hear the one about the cop, the blonde, the psycho and the mafia princess? Birds Of Prey And the Fantabulous Emancipation of One Harley Quinn, coming to DVD, Blu-ray and 4K UHD 20th June 2020 ... END_OF_DOCUMENT_TOKEN_TO_BE_REPLACED
Hot PicksView