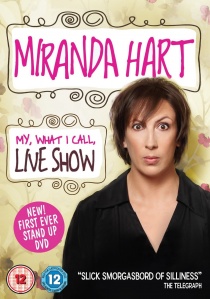 Miranda Hart is to release her first-ever comedy stand-up DVD. Miranda Hart: My, What I Call, Live Show was recorded earlier this year at London's O2 Arena, as part of the much loved comedienne's nationwide sell-out tour. The DVD will be released courtesy of BBC Worldwide on 17th November 2014 and is also offered as a download to own.

This exclusive to DVD recording captures all the excitement and silliness of Miranda's tour - in the first time she has performed stand-up since the success of her BBC One sitcom Miranda.

Miranda Hart said: "It was amazing to have the chance to do an arena stand-up tour. I hope people have the ball that me and the audience did recording this DVD when watching it."

Viewers can expect plenty of laughs, larks and audience interaction. The Queen of comedy invites everyone to take part in a giant party with her, while sharing her unique observations on everyday life and revealing hilarious and worryingly completely true anecdotes about her own mishaps and misdemeanours. All in all it's such fun!

In addition to the 90 minute live show, the DVD extras also include an exclusive behind- the- scenes film showing all the backstage action and a chance for fans to meet Miranda's dog Peggy.

UHD
Say the 'B' word three times and have a wonderful Day-O as Tim Burton's Beetlejuice arrives for the first time on 4K UHD 31st August 2020 from Warner Home Video. END_OF_DOCUMENT_TOKEN_TO_BE_REPLACED
Hot PicksView