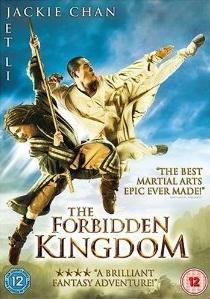 A battle between the big screen's kung-fu masters; a war between good and evil as ancient as the egg from which the Monkey King was born. And a boy from the twenty-first century, obsessed with martial arts, thrust into a magical kingdom from which he cannot escape until he masters the ancient art of kung-fu and discovers the true meaning of bravery.

Critically acclaimed director Rob Minkoff (The Lion King, Stuart Little) joins forces with legendary choreographer Yuen woo Ping (The Matrix, Crouching Tiger Hidden Dragon and House of the Flying Daggers) to create an action-packed fantasy that combines the coming-of-age charm of The Karate Kid with the visual splendour and escapism of The Never Ending Story.

When he fails to stop local thugs from harming the old man he has befriended, Jason Tripitikas (Michael Angarano - 24, Will and Grace, Seabiscuit) makes an extraordinary discovery that sends him hurtling back in time to ancient China. There, Jason is charged with a monumental task: he must free the fabled warrior The Monkey King, who has been imprisoned by the evil Jade War Lord, by learning the true precepts of kung fu. Only then will he be able to find his way home. Jason is joined in his quest by wise kung fu master Lu Yan (Jackie Chan) and a band of misfit warriors including Silent Monk (Jet Li) and the mysterious Golden Swallow (Yifei Liu). The results are heart-warming comedic banter mixed with beautifully choreographed martial arts scenes -- a feast for all the senses.

Based on the same ancient legend that inspired Damon Albarn's internationally celebrated opera Monkey: Journey into West and 1970s TV cult legend Monkey Magic, Forbidden Kingdom, released by Lions Gate Home Entertainment on DVD and Blu-Ray from 17th November 2008, explores the true meaning of bravery and friendship. Set against the breath-taking backdrop of China (a feat that few American films have ever achieved), this is an action-packed fantasy adventure that will enthral the entire family.

DVD
When the world is locked down, they'll find their ticket out in Locked Down, released on DVD 7th June 2021 from Warner Home Video. END_OF_DOCUMENT_TOKEN_TO_BE_REPLACED
Top PicksView