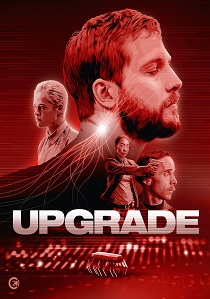 The critically acclaimed breakout Sci-Fi hit of 2018, Upgrade from director Leigh Whannell (Insidious, Saw) and the team behind Get Out, gets its highly anticipated enhanced release as a Limited Edition Blu-ray, complete with a host of brand new special features from Second Sight Films.

In a near-future world, where technology controls everything, technophobe Grey Trace (Logan Marshall-Green - The Invitation, Spider-Man: Homecoming) is the victim of a brutal mugging that leaves his wife dead and him paralysed. A reclusive billionaire inventor offers him an experimental cure, an A.I. implant called STEM. Grey accepts and is immediately transformed into an unstoppable killing machine with enhanced strength and agility.

Genre specialist Blumhouse and the visionary creator of the Saw franchise team up to create an instant cyberpunk classic with Upgrade, arriving as a Limited Edition Blu-ray 18th November 2019 from Second Sight Films.