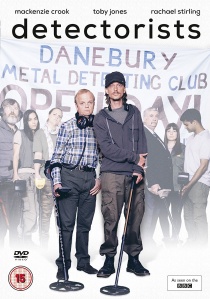 Metal Detecting is the hobby du jour in the acclaimed new sitcom Detectorists, written by, directed and starring Mackenzie Crook (The Office, Pirates of the Caribbean) alongside his co-star Toby Jones (The Hunger Games, The Girl). It premieres on BBC4 and comes to DVD courtesy of RLJ Entertainment's Acorn Label.

Mature student archaeologist Andy (Crook) and his friend Lance (Jones), share a passion for metal detecting. As members of Danebury Metal Detecting Club they spend their spare time in muddy fields in search of their dream: to uncover the final resting place of King Sexred, a wealthy East Saxon King. But while they search for the past, they must also grapple with the present.

For Andy that includes trying to keep his head above water with Becky (Rachael Stirling - The Bletchley Circle), his long-standing girlfriend. For Lance it's trying to win back his ex-wife Maggie (Lucy Benjamin - Eastenders), from the local take-away pizza manager. Both of them face an invasion of their turf by rival detectorists the Antiquisearchers.

It's an uphill, down dale, over field and around the meadow struggle. But they know at heart in a buried world of tin can pulls and toy cars, there's something waiting that - if only they could find it - would change their lives forever.

You won't need a metal detector to discover this little national treasure, soon to be a jewel in the crown of British TV comedy on DVD from 10th November 2014.