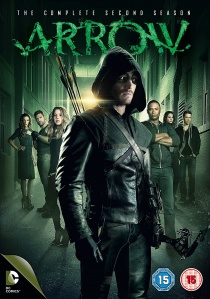 Arrow: Season 2 is the epic sci-fi serial drama that breeds a whole new level of superhero. The crime fighting masked vigilante with a bow and arrow returns to Starling City as Arrow Season 2 aims and shoots to Blu-ray and DVD on 22nd September 2014 from Warner Home Video.

Arrow: Season 2 follows the story of spoiled billionaire playboy Oliver Queen (Stephen Amell) who becomes missing and presumed dead when his yacht is lost at sea. He returns five years later a changed man, determined to clean up the city as a hooded vigilante armed with a bow. Season two focuses on Oliver's decision to stop all criminals, without killing them, following the death of his best friend. Oliver must also contend with outside forces attempting to take over Queen Consolidated, as well as the revelation that certain individuals have returned from perceived death. Oliver is later forced to reveal his identity to Roy Harper (Colton Haynes) in order to protect and use him and his help to take down the criminals and all of the other bad people who try to destroy the city.

Target your copy of Arrow Season 2 as it launches onto Blu-ray and DVD from 22nd September 2014 from Warner Home Entertainment.