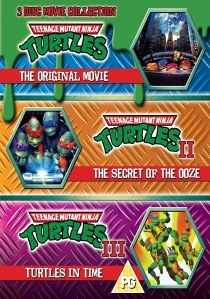 Teenage Mutant Ninja Turtles are destined to be huge again with the impending 2014 release of Michael Bay's (Transformers) $125 million live action reboot. So join Leonardo, Michealangelo, Donatello and Raphael and their loyal sensei Splinter as they battle evil enemies in the original three rip-roaring, action-packed adventures which will be released as a bumper three-disc set for the first time on Blu-ray along with a DVD version on 28th October 2013 thanks to Mediumrare Entertainment.

Teenage Mutant Ninja Turtles I The Original Movie: For years Michaelangelo, Leonardo, Donatello and Raphael have lived deep in the sewers of New York, learning the art of Ninja from their master, Splinter. But when a massive crime wave sweeps the city, the man-sized, pizza eating Teenage Mutant Ninja Turtles join forces with reporter April O'Neil and vigilante Casey Jones to combat the corrupt gang of criminals and their mysterious leader...the evil Shredder.

Teenage Mutant Ninja Turtles II The Secret Of The Ooze: The turtles are up to their shells in trouble when a canister of toxic ooze falls into the hands of the evil master Shredder. Aided by their new pal Keno, the pizza delivery boy, the turtles take on the Shredder and his mutant allies, Rahzar and Tokka, to capture and destroy the dangerous ooze and make the world safe for Turtles, humans and pizza.

Teenage Mutant Ninja Turtles III Turtles In Time: When April O'Neil buys what she thinks is a harmless Japanese antique its magical powers are revealed when she is thrust back in time 400 years to 17th century Japan and into the hands of an evil Emperor. Our turtley awesome heroes only have days to travel back in time, defeat ancient warriors, rescue April and somehow make it back home while the pizza's still hot.

BD
Released on DVD and Blu-ray 27th July 2020 from Dazzler Media, created by visionary award-winning filmmaker of The Raid, Gangs of London takes audiences on an immersive journey into the hidden heart ... END_OF_DOCUMENT_TOKEN_TO_BE_REPLACED
Hot PicksView