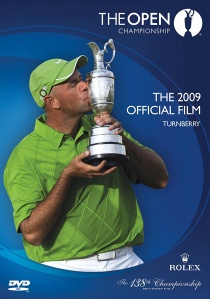 News
News Article Go back to homepage
Released by Good Guys Media on 5th October 2009, the history and tradition that surrounds The British Open Championship always creates great excitement and expectation and the 2009 tournament.
Good Guys Media
1 hour 54 minutes
05/10/2009
Thank you for supporting DVD365.net when you order using the link(s) below. As an Amazon Associate we earn from qualifying purchases
Buy DVD
Information

The history and tradition that surrounds The British Open Championship always creates great excitement and expectation and the 2009 tournament, set against the beautiful, lush backdrop of the Turnberry resort in Scotland was no different. However, no-one could have foreseen the drama that was to unfold as the best golfers in the world fought to claim the prestigious Claret Jug. This DVD, released by Good Guys Media on 5th October 2009, follows the ups and downs of what was to be one of the greatest battles ever to claim the right to be the champion of the 138th Open.

In what would probably have been the greatest sporting achievement ever, Tom Watson walked up to the final hole at Turnberry needing par for victory, the world held its breath while it waited for a new hero. But, the ball slipped past the hole when Watson wavered over his 10-foot victory putt and Stewart Cink took victory after a four hole play-off. So many men led the Open on the final day making the 2009 tournament one of the most memorable ever. At various points in the afternoon three different Englishmen had led, with Ross Fisher keeping his mind on his golf and his pregnant wife, while Lee Westwood was reminded how brutal and unforgiving the Scottish links course could be and Chris Wood looking like a future winner. In the end, Cink won his first ever Open but crushed the dreams of a 59 year old legend and may just have become the biggest villain in the history of the tournament!

Re-live all the amazing moments of what was regarded as one of the best and most thrilling golf tournaments ever. For those who have a love and passion for the great game, this DVD makes for compelling viewing and is a reminder of how wonderful and yet how cruel game that is Golf is!