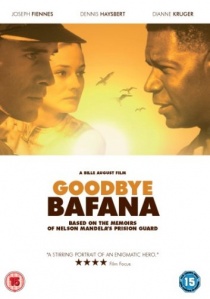 BAFTA®-nominated director Bille August tells the inspirational true story of Nelson Mandela's impact on one man's conscience and a Nation's freedom. Joseph Fiennes (Shakespeare In Love, Enemy At The Gates) stars as a Robben Island prison guard alongside on screen wife Diane Kruger (Troy), whose life is changed forever when he is put in charge of high-profile prisoner Nelson Mandela, played by Golden Globe® Winner Dennis Haysbert (24), in the award-winning Goodbye Bafana, released by Paramount Home Entertainment from 15th October 2007.

Gregory (Fiennes), a white Afrikaner in a country divided on racial grounds, gradually falls under the spell of his dignified and charismatic prisoner and as time passes the two men develop a profound secret friendship. The bond between them causes Gregory to confront his own racist past, a change which empowers him to help Mandela on his journey to free South Africa of apartheid and injustice. August uses the versatile landscape of South Africa as a stunning backdrop to show both the beauty and harsh reality of human suffering.

The audience is directed through a journey which highlights modern-historical injustices, with the emotionally-gripping acting of Fiennes and Haysbert through previously untold memoirs. Goodbye Bafana is a heart-rending story of a search for justice and equality created through humanity.

HotDVDBDUHD
The end of the line is only the beginning in a wild, non-stop thrill ride through modern-day Japan as Bullet Train is released on DVD, Blu-ray and 4K UHD 24th October 2022 from Sony Pictures Home Entertainment END_OF_DOCUMENT_TOKEN_TO_BE_REPLACED
Top PicksView