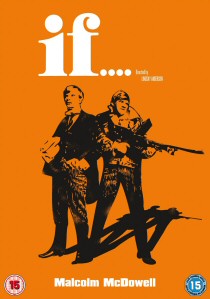 NewsTV SeriesHistory
News Article Go back to homepage
Surreal, highly controversial, and bloodily anti-establishment, If... was made to shock. Filmed in 1968, at the time of the Paris student uprisings, this acclaimed trailblazing film won accolades at the time of its release and continues to pull in plaudits more than thirty years later.
Robert Swann, Rupert Webster, Christine Noonan, Richard Warwick, David Wood, Malcolm McDowell
Lindsay Anderson
Albert Finney, Roy Baird, Michael Medwin, Lindsay Anderson
Paramount Home Entertainment
1 hour 51 minutes
23/07/2007
Thank you for supporting DVD365.net when you order using the link(s) below. As an Amazon Associate we earn from qualifying purchases
Buy DVD
Information

Surreal, highly controversial, and bloodily anti-establishment, If... was made to shock. Filmed in 1968, at the time of the Paris student uprisings, this acclaimed trailblazing film won accolades at the time of its release and continues to pull in plaudits more than thirty years later. In 1969, If... won the Grand Prix at the Cannes film festival, and has recently been voted 12th in The British Film Institute's 'Favourite British Films of the Twentieth Century' poll.

Directed by Lindsay Anderson and shot at his own school in Cheltenham, If... is the story of rebellion against autocracy, but represents something far darker. Showcasing one of Malcolm MacDowell's earliest great performances, it was If... that caught Stanley Kubrick's eye while he was casting A Clockwork Orange.

MacDowell's Mick Travis is returning to his public boys' school for a new term. Terminally persecuted by the Whips, Travis and his non-conformist gang encounter all of the stereotypical traditions of boarding school life. Choosing to ask when we live, rather than fitting in to life thrust upon them, Travis and his friends embark on a series of misadventures that protract their experience of eroticism, authority and violence.

The film sets out with scenes of eerie reverie and shocking brutality, such as genital inspections and confirmation classes. As the prison-like nature of school tries to take hold and beatings become routine, Travis's reactions become increasingly bold, eventually culminating in breathtaking scenes of tyranny and destruction.

Nominated for two BAFTAs for direction and screenplay, If... stunned critics and firmly established MacDowell in the big league. Now released for the first time ever on DVD, If... comes with a realm of extras to enhance the 'up-yours' experience.