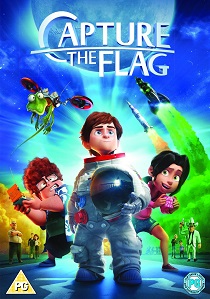 An entertaining thrill-ride that takes viewers on an exciting journey into space, the animated family film Capture the Flag arrives on Blu-ray, DVD and Digital HD on 30th May 2016 from Universal Pictures (UK).

The film weaves a fantastical tale of a boy, his father and grandfather who come together to protect the legacy of the original moon landing. With reimagined animated scenes of the famed Apollo 11 mission, Capture the Flag offer fans of all ages an entertaining take on NASA and space exploration.

Space travel runs in Mike Goldwing's family: both his father and grandfather were astronauts. But the plucky 12-year-old's estranged grandfather, Frank, has lived a life isolated from his family after missing out on the chance to make history as a member of the Apollo 11 crew.

However, when Mike discovers that an eccentric billionaire plans to fly to the moon, claim its vast, valuable mineral resources, and destroy the American flag planted by the Apollo 11 astronauts, the countdown to a spectacular adventure begins!

Mike, teamed with his grandfather, best friends Amy and Marty, and a clever chameleon, blasts off on an incredible moon-bound mission, determined to thwart the billionaire's evil plan, capture the flag, and reunite his divided family.

DVD
After more than thirty years of service as one of the Navy's top aviators, Pete 'Maverick' Mitchell is back where he belongs as Top Gun: Maverick flies onto DVD, Blu-ray and 4K UHD 31st October 2022 from Paramount Home ... END_OF_DOCUMENT_TOKEN_TO_BE_REPLACED
Top PicksView