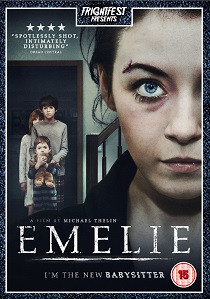 NewsHorror
News Article Go back to homepage
Emelie, released on DVD by Frightfest Films on 4th April 2016, is a nerve-shredding horror that taps into every parent's worst fear: what would happen if your babysitter isn't quite what they seem to be?
Carly Adams, Thomas Bair, Sarah Bolger, Chris Beetem, Carl Bailey
Michael Thelin
Andrew Corkin
Frightfest Films
1 hour 20 minutes
04/04/2016
#Emelie
Thank you for supporting DVD365.net when you order using the link(s) below. As an Amazon Associate we earn from qualifying purchases
Buy DVD
Information

Tense, shocking, and unbearably claustrophobic, Emelie is a nerve-shredding horror that taps into every parent's worst fear: what would happen if your babysitter isn't quite what they seem to be? With an unsettling lead performance from Sarah Bolger (The Lazarus Effect), Emelie is a believable nightmare that could come knocking at your door...

The Thompsons, a loving family living in a peaceful suburb are the very definition of wholesome normalcy. But on the eve of their thirteenth wedding anniversary their usual babysitter has to cancel, leaving Dan and Joyce to call upon a new girl who seems like a dream come true to their three children: Christopher, Sally and Jacob.

As the night creeps on, the kids slowly realize something is very wrong and this woman is not who she claims to be. Jacob, the eldest, must grow up quickly if he wants to save his siblings from the sinister intentions of Emelie, the disturbed woman masquerading as their babysitter.

Emelie is released by Frightfest Films and is available on DVD Monday 4th April 2016 and on VOD & for download from 14th March 2016.