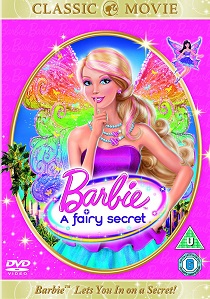 Despite celebrating her 50th birthday in 2009, Barbie continues to be one of the most successful and popular children's brands of all time. It is estimated that over a billion Barbie dolls have been sold worldwide in over 150 countries and that three are sold every second! This is in addition to the huge range of books, games and accessories that also contribute to the massive exposure for the brand.

Not surprisingly, a new Barbie DVD is a major event in the children's market which is why Barbie - A Fairy Secret, released by Universal on 14th February 2011, is expected to be one of the biggest-selling kids' DVDs of 2011.

It's an amazing adventure in which Barbie discovers there are fairies living secretly all around us!

When Ken is suddenly whisked away by a group of fairies, Barbie's two fashion stylist friends reveal they themselves are actually fairies and that Ken has been taken to a magical secret fairy world not far away!

Barbie and her rival Raquelle take off with their fairy friends on an action-packed journey to bring him back. Along the way they learn that they must stick together and discover that the real magic lies not just in the fairy world itself but in the power of friendship.

UHD
Almost four decades after he drew first blood, Sylvester Stallone is back as John Rambo in a deadly journey of vengeance as Rambo: Last Blood is released on DVD, Blu-ray and 4K UHD 13th January 2020 ... END_OF_DOCUMENT_TOKEN_TO_BE_REPLACED
Hot PicksView