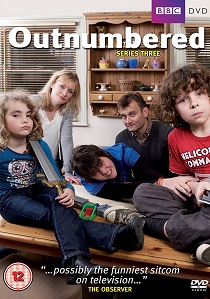 Fresh from its success at the 2009 British Comedy Awards, including the top prize of Best Comedy, the semi-improvised family based sitcom Outnumbered returns for a third series.

Written by, Andy Hamilton and Guy Jenkin's (creators of Drop the Dead Donkey) this critically acclaimed comedy, puts three young children at the very centre of the story - and allows them to improvise into the bargain. Capturing family life at its most deliciously chaotic, BBC DVD is proud to announce the release of Outnumbered Series 3 on DVD from 15th November 2010 and also available now on iTunes.

Series 3 introduces conspiracy theories, sex education, psychotherapy, colonoscopies, astrology and kangaroo saliva - just a handful of the obstacles that the Brockman family must negotiate in the latest series of the multi-award winning comedy Outnumbered.

While Karen busies herself recreating Britain's Got Talent and introduces her family to the wonderful world of superstition, Ben tackles the school chess league in his own ineffable style and mum worries that Jake's healthy interest in the girl-next-door is turning unhealthy. Meanwhile, Dad is grumbling about an ailment that much to the children's amusement may require some invasive investigation. To make things even more uncomfortable, Gran has come to stay and made the family a generous offer that may be difficult to refuse. And there are rocky waters ahead after Pete makes a very foolish mistake.