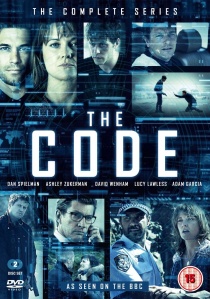 Arrow Films is proud to announce the 3rd November 2014 DVD and digital download release of the acclaimed Australian political conspiracy thriller The Code.

Internet journalist Ned Banks (Dan Spielman, One Perfect Day) and his brother, the troubled hacker Jesse Banks (Ashley Zukerman, Terra Nova) are gifted a poisoned chalice when a phone video of a deadly outback accident arrives in their in-box.

Their decision to dig deeper drags the brothers into the darkest heart of politics. Together, with the help of Alex Wisham (Lucy Lawless, Xena: Warrior Princess) and Perry Benson (Adam Garcia, Coyote Ugly) they suddenly become the unlikeliest crusaders for democracy.

Stretching from the spectacular red desert of Australia's outback to the cool corridors of power in Canberra, The Code tells the story of two very different brothers who unearth information those at the highest levels of political power will kill to keep secret.

HotDVDBDUHD
An action thriller unlike any other, a young getaway driver relies on the beat of his personal soundtrack to be the best in the game in Baby Driver, the newest explosion of genre-crossing excitement from writer-director Edgar Wright, released on 4K Ultra HD, Blu-ray and DVD ... END_OF_DOCUMENT_TOKEN_TO_BE_REPLACED
Top PicksView