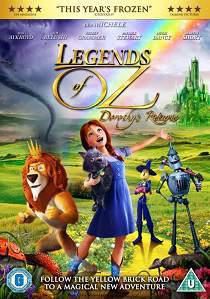 Some of cinema's most beloved characters return for a brand new musical adventure as Legends of Oz: Dorothy's Return bursts onto Blu-ray, DVD and on demand from 22nd September 2014, courtesy of Signature Entertainment.

Perfectly aligned with the 75th anniversary of the original film, Legends of Oz: Dorothy's Return sees Dorothy Gale (Michele) waking up to a devastated, post-tornado Kansas before being rushed back to Oz to save her old friends the Scarecrow (Aykroyd), the Tin Man (Grammer), the Cowardly Lion (Belushi), Glinda the Good Witch (Bernadette Peters) and the entire Land of Oz from the devious brother of the Wicked Witch of the West - The Jester (Martin Short).

With Dorothy as their only hope to restore happiness to the Emerald City, she embarks on another journey along the yellow brick road, meeting a host of new friends including Wiser the Owl (Oliver Platt), Marshal Mallow (Dancy) and Tugg the Treeboat (Stewart) along the way.

Co-directed by Will Finn (Pocahontas, Beauty & The Beast, Aladdin, The Little Mermaid) and Daniel St Pierre (The Lion King, Shark Tale, Tarzan) Legends of Oz: Dorothy's Return is a fun-filled and magical adventure for all the family, revisiting a classic with a thoroughly modern slant.