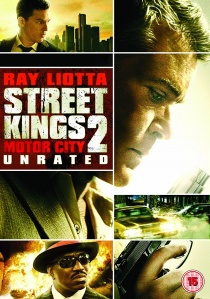 Ray Liotta stars as Marty Kingston in this action-packed sequel to 2008's Street Kings. A gritty tale of

corruption, murder and double-crossing in Detroit; buckle up for Motor City on DVD, released on 3rd October 2011 from Twentieth Century Fox Home Entertainment!

Fate is out to get Kingston (Liotta, Goodfellas) when, after saving the life of his partner during a drugs bust four years ago, the same man is brutally murdered by a masked gunman who disappears without a trace. Kingston is forced to team up with hotheaded homicide detective Dan Sullivan (Shawn Hatosy,Bad Lieutenant) to investigate the murder, but when the rest of their team start getting killed off one by one their case becomes a race against time!

In a bid to uncover the layers of corruption and deceit and get to the truth the duo is forced to trust no-one and even begin to question each other... Loaded with plot twists, car chases, shoot outs and intrigue, Street Kings 2 delivers a no-holds barred journey into the crime underworld of Detroit.

Street Kings 2 on DVD includes a selection of deleted scenes and making-of featurettes and is also available in a double pack alongside the original Street Kings starring Keanu Reeves and Forest Whitaker.

UHD
After more than thirty years of service as one of the Navy's top aviators, Pete 'Maverick' Mitchell is back where he belongs as Top Gun: Maverick flies onto DVD, Blu-ray and 4K UHD 31st October 2022 from Paramount Home ... END_OF_DOCUMENT_TOKEN_TO_BE_REPLACED
Top PicksView