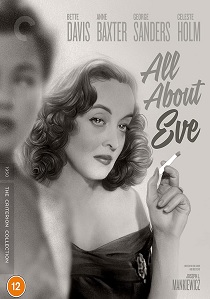 All About Eve: The Criterion Collection (1950)

In this devastatingly witty Hollywood classic from Joseph L. Mankiewicz (Cleopatra), backstage is where the real drama plays out.

One night, Margo Channing (Bette Davis; Now, Voyager) entertains a surprise dressing-room visitor: her most adoring fan, the shy, wide-eyed Eve Harrington (Anne Baxter; The Magnificent Amberson). But as Eve becomes a fixture in Margo's life, the Broadway legend soon realises that her supposed admirer intends to use her and everyone in her circle, including an acid-tongued critic played by George Sanders (Rebecca), as stepping-stones to stardom.

Featuring stiletto sharp dialogue and direction by Mankiewicz, and an unforgettable Davis in the role that revived her career and came to define it, the multiple-Oscar-winning All About Eve is the most deliciously entertaining film ever made about the ruthlessness of show business.

All About Eve is given the Criterion treatment and released on Blu-ray 23rd August 2021 from Sony Pictures Home Entertainment.

BD
Packed with twists and turns from beginning to end, starring Matt Damon and directed by Academy Award winner Tom McCarthy, Stillwater is available to own on Blu-ray and DVD 6th December 2021 from Universal Pictures (UK). END_OF_DOCUMENT_TOKEN_TO_BE_REPLACED
Top PicksView