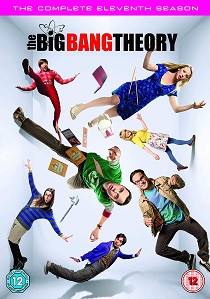 In its eleventh season, The Big Bang Theory garnered an audience of nearly 19 million Weekly Viewers, solidifying its spot as one of the top sitcoms, and broadcast programs in general, across all demographics. Now, ahead of the much-anticipated twelfth season premiere, Warner Home Video is set to release The Big Bang Theory: The Complete Eleventh Season on Blu-ray and DVD 24th September 2018. The release will also delight fans with three all-new bonus featurettes, and a hilarious gag reel. Blu-ray release will also include the 2017 Comic-Con cast panel.

Drs. Leonard Hofstadter (Galecki) and Sheldon Cooper (Parsons) are brilliant physicists - geniuses in the laboratory, but socially challenged everywhere else. Enter beautiful, street-smart neighbour, Penny (Cuoco), who aims to teach them a thing or two about the "real" world.

Despite their on-again, off-again relationship in the past, Leonard and Penny have tied the knot. Even Sheldon has found a female companion - entering into a "relationship agreement" with neurobiologist Amy Farrah Fowler (Bialik) and he recently took their relationship to the next level by proposing marriage. Will the possibility of domestic bliss alter the chemistry between these two extreme achievers?

Will Leonard prove to be a brilliant writer? Will Raj's search for new love rival his search for new stars in the cosmos? Will Howard Wolowitz (Helberg) and Howard's adorable microbiologist wife Bernadette (Rauch) growing family reach critical mass? Quantum comedy continues to converge in all 24 Season Eleven episodes of this laugh-out-loud megahit.

DVD
A detective in a small Pennsylvania town investigates a local murder while trying to keep her life from falling apart in Mare of Easttown, released on DVD and Blu-ray 13th September 2021 from Warner ... END_OF_DOCUMENT_TOKEN_TO_BE_REPLACED
Top PicksView