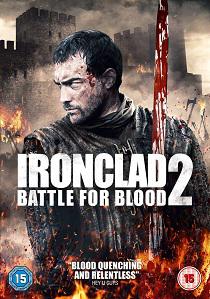 A tale of honour; Ironclad 2: Battle for Blood follows Celtic raiders who, scorned by the loss of their land and the abuse of their people, wreak their bloody revenge on the British - one village at a time.

When the raiders set their sights on The De Vesci castle walls and patriarch Gilbert De Vesci (David Rintoul, The Iron Lady) is gravely injured, he sends son Hubert (Tom Rhys Harries, Parade's End) to call on his battle-weary and reluctant cousin Guy (Tom Austen, The Borgias) - a survivor of the 13th Century Great Siege of Rochester Castle - for aid.

As the conflict escalates and Gilbert dies, his desperate wife Joan (Michelle Fairley, Game of Thrones) begs Guy to take any action necessary to defend her beautiful young daughters from the scourge of the Celts. Stirred by loyalty and love for the young Blanche De Vesci (Roxanne McKee, Hollyoaks) can Guy finally put the past behind him in order to save his family?

Launch into the fray when Ironclad 2: Battle for Blood is released on Blu-ray and DVD on 28th July 2014, or immerse yourself in the entire saga when both Ironclad films are released in a DVD box-set on the same date.

UHD
Disney and Pixar's original feature film Luca, released on DVD, Blu-ray and 4K UHD on 23rd August 2021, is a fun and heartwarming story about friendship, stepping out of your comfort zone and two ... END_OF_DOCUMENT_TOKEN_TO_BE_REPLACED
Top PicksView