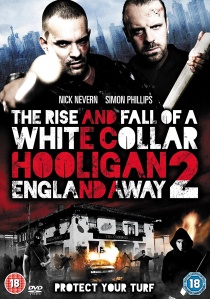 After the success of football terrace gangster flick The Rise and Fall of a White Collar Hooligan, Director Paul Tanter (Fall of The Essex Boys, Jack Falls) is back with the DVD release of the fist thumping sequel White Collar Hooligan 2: England Away, out on 20th May 2013, courtesy of Entertainment One. Also released on the same day will be a special edition Blu-ray double pack of both films.

Mike Jacobs (Nevern) is back and living the good life in Spain with a new identity under the witness protection scheme. However, when old enemies discover his whereabouts and kidnap his girlfriend, Mike has just four days to pay off the gangsters or he will never see her again. His journey takes him to New York City and back to London to meet up with his old partner, Eddie, pulling together his own team of hooligans to formulate a plan that will leave them free of the underworld forever.

White Collar Hooligan 2: England Away is bigger, harsher and more violent than ever before - get your hands on the DVD and the Blu-ray double pack on 20th May 2013.