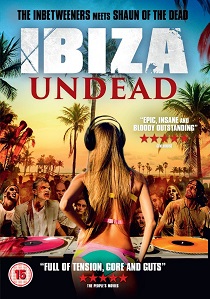 The Inbetweeners meets Shaun of the Dead in the riotously entertaining British zombie film Ibiza Undead, released on DVD by Soda Pictures on 20th March 2017.

A group of young people head to Ibiza for the holiday of a lifetime - all the sun, sea and debauchery they can handle. Leaving the girls behind, the lads get in to an exclusive club where the performers are the undead. But one of the lads' drunken antics lead to the zombies escaping their restraints... Soon all hell breaks loose and no one on the party island is safe.