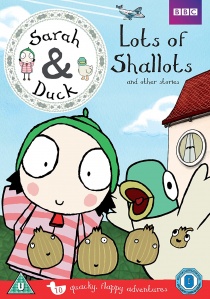 Sarah & Duck, the charming CBeebies 2D animated series about a girl with big eyes and a green hat and her flappy, quacky best friend Duck, waddles on to DVD for the first time on 17th February 2014, courtesy of BBC Worldwide.

With the voice of the narrator provided by The Thick of It's Roger Allam and Downton Abbey star Lesley Nicol breathing life into the Scarf Lady, Sarah & Duck on DVD follows the delightfully-drawn duo as they embark on a series of simple but exciting adventures, exploring the world in their own imaginative, quirky way - trying to reach a rainbow, pretending to be a penguin, or helping an umbrella to stay dry!

Every step of the way they are guided by the narrator who offers helpful suggestions and makes sure they don't go too far. And they are joined by other friends and neighbours Bug, Scarf Lady, Lots of Shallots and Scooter Boy.

The DVD includes the first 10 "quack-tastic" episodes of the travelling twosome's colourful adventures: Lots of Shallots, Sarah, Duck & the Penguins, Cheer Up Donkey, Cake Bake, Scarf Lady's House, Robot Juice, Bouncy Ball, Rainbow Lemon, Sit Shop and Kite Flight. Sarah & Duck fans young and old will be thrilled to learn that these episodes are also available to download to own so that they can be enjoyed on the move.

In addition to the DVD release, a brand-new Sarah & Duck plush toy range with PoshPaws and a series of Picture Books from Puffin will be in-store this Spring. The plush toy range - which includes a small talking Sarah who says, "Come on Duck" and a small Duck who "Quacks" - will encourage young children to recreate Sarah & Duck's wide-eyed and quacky adventures at home. In addition, a larger version of Duck will also be available when the range goes on sale in February.

Sarah & Duck is a Karrot Entertainment production for CBeebies. It was co-created by Karrot Entertainment's Creative Director Tim O'Sullivan and designer/writer Sarah Gomes Harris - based on her own love of ducks as a child. The producer is Jamie Badminton and the executive producers are Alison Stewart, Chris White and Henrietta Hurford-Jones. 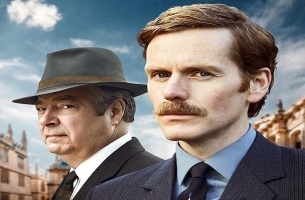