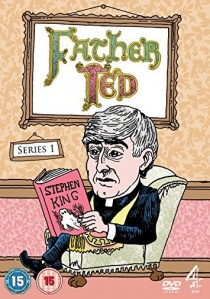 With brand new packaging individually designed by Tony Millionaire, Father Ted Series 1, 2, & 3 are out to own on DVD from 11th March 2013 from Channel 4 DVD.

From award-winning creators Graham Linehan & Arthur Mathews and starring Dermot Morgan as the eponymous Father Ted Crilly, the brilliant and much-loved comedy, Father Ted, Series 1, 2 and 3 are now available to own separately on DVD from 11th March 2013.

Series 1 is based in a small parochial house on a tiny outcrop of rock somewhere off the west coast of Ireland with three priests and a housekeeper locked in an endless series of philosophical debates. Catholicism or cake? Religion or rollerblading? Tiny cows or big cows that are far away? Welcome to the confusing and confused, world of Father Ted!

Ted's patience is fully tested in Series 2 by a succession of undignified incidents involving irate protest singers, hairy hands, stolen whistles and nude sleepwalkers. Events come to a head with a life and death struggle on an under-fuelled aircraft with an over-fuelled Jack. Life isn't getting any easier for Father Ted...

Craggy Island's population of psychopathic milkmen, Nazi sympathisers and lecherous old ladies mean Ted is up against it more than ever in Series 3. And then there's the not-so small matter of Bishop Brennan's arse to contend with! Luckily for Ted, he has the faithful presence of Dougal and Jack plus an endless supply of Mrs Doyle's tea to help him cope. Luckily...

BD
In The Little Things, released on DVD and Blu-ray 10th May 2021 from Warner Home Video, Kern County Deputy Sheriff Joe "Deke" Deacon is sent to Los Angeles for what should have been a quick evidence ... END_OF_DOCUMENT_TOKEN_TO_BE_REPLACED
Hot PicksView