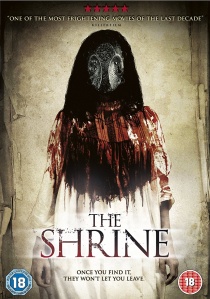 From award-winning filmmaker Jon Knautz, writer-director of the cult hit horror-comedy Jack Brooks: Monster Slayer, comes The Shrine, released on DVD and Blu-ray by Arrow Films on 27th February 2012, "a wonderfully eerie slice of Lovecraftian horror" (BeyondHollywood.com) that sets itself up as a traditional genre entry before brilliantly and unexpectedly pulling the rug from beneath the viewer with a killer twist.

Starring Aaron Ashmore (Smallville; Veronica Mars), Cindy Sampson (Supernatural; Reaper) and Meghan Heffern (The Fog; Chloe), The Shrine has been hailed as "true-blue horror all the way... uncompromising and aggressively nasty" (FearNet.com) and gained plaudits for its "great story arc, solid writing and acting and a last act that'll blow you away" (AnythingHorror.com).

When a young American goes missing in Poland while backpacking around Europe, ambitious journalist Carmen (Sampson) links his disappearance to a number of similar events that have occurred over the years in and around the remote rural village of Alvaina. With the US and Polish authorities showing little interest in the case, Carmen decides to investigate the story herself, hoping for a scoop that will forward her career as a writer.

She convinces her photographer boyfriend, Marcus (Ashmore) and her young intern at the newspaper, Sara (Heffern), to join her in trying to uncover the truth and the trio travels to Alvaina to make some initial enquiries. On arrival at the village they immediately attract the unwelcome attention of the hostile locals who order them to leave the area. Fearing for their safety Marcus is ready to give up and go home, but Carmen and Sara become intrigued by and drawn to a mysterious fog hanging over the nearby woods. On entering the mist, they come across what appears to be an ancient statue - a discovery that leads them on the path to a revelation far more terrifying than anything they could possibly imagine.

A solid supernatural chiller that recalls elements of The Exorcist, Jacob's Ladder and The Evil Dead, The Shrine is an unexpected gem of a horror film and boasts a Grammy nominated (for Best Score Soundtrack For Visual Media) score by award-winning composer Ryan Shore (Stan Helsing; Numb; The Girl Next Door).

BD
A stellar cast sizzles in Heat, a taut psychological drama about an obsessive detective and a brilliant thief whose fates are linked in the aftermath of a high-stakes securities heist, released on 4K UHD 8th August 2022 from ... END_OF_DOCUMENT_TOKEN_TO_BE_REPLACED
Top PicksView