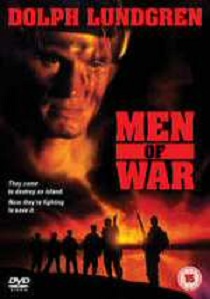 Dolph Lundgren stars as Nick Gunar, a down-and-out former commando and mercenary struggling to readjust to civilian life in Chicago. An opportunity to get his life back to how it used to be presents itself when two businessmen offer him the job of leading a team of guerrillas to a remote Pacific island in order to convince the local natives to sign over the island's lucrative mineral rights. To assist him on the mission, Nick recruits a small group of his former mercenary buddies, all crack commandos with dubious moral values and whose only concern is getting the job done quickly and claiming their pay, no matter what the cost.

Having arrived on the idyllic paradise island and met the peaceful locals, who bluntly refuse to give up their land, Nick learns the truth behind the venture and decides to change sides to help defend the island against the industrialists. But his about-face causes a rift amongst his band of soldiers of fortune and he soon finds himself caught in the middle of a violent conflict as the battle for control of the island spirals out of control. Beautifully shot on location in Thailand and considered by many action movie fans to be among the best of Dolph Lundgren's career to date, Men Of War is a hard-hitting, testosterone-fuelled adventure with an unusually effective emotional core.