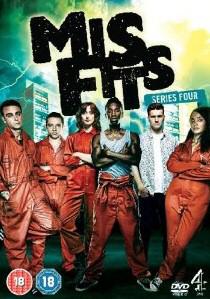 It's time to power up. The future's bright; the future's still a dirty shade of orange. Available to own on DVD and Blu-ray from 26th December 2012 from Channel4 DVD, BAFTA® award-winning Misfits is back with brand new series and a new cast!

Created by Howard Overman (Merlin, Vexed), our favourite ASBO superheroes return and its business as usual which means the iconic orange boiler suits are back along with probation workers with questionable morals and a few dead bodies, of course!

Joining Curtis (Nathan Stewart-Jarrett) and Rudy (Joseph Gilgun), Misfits welcomes three new gang members. There's the tough and feisty Jess (Karla Crome - Hit and Miss, Murder) who has the power to see through people's bulls**t - and we mean that quite literally! Then there's the cheeky, baby-faced Liverpudlian, Finn (Nathan Mcmullen - Shameless) who has an ineptitude for telekinesis. Both newbies are on community service in the opening episode, before the introduction of new character Alex played by newcomer Matt Stokoe who is not in orange but is key to the series. Finally there's Abby (Natasha O'Keefe) who the gang meet at a party. Find out if she will become part of the Misfits gang...

As Jess and Finn start their community service, they soon realise there's more to it than scrubbing off graffiti and picking up litter. With a six foot killer rabbit on the estate, a mysterious but easy-on-the-eye barman and the arrival of the Four Horsemen of the Apocalypse, this series promises to be full of twists and is guaranteed to shock and surprise!

With brand new faces and some powers right off the actual A-list, Misfits Series 4 is a must have DVD for fans. You can also catch-up with the BAFTA® award-winning series from the very beginning with the Series 1-4 box-set also released on 26th December 2012 which features the original gang played by; Robert Sheehan, Lauren Socha, Nathan Stewart-Jarett, Antonia Stewart and Iwan Rheon.