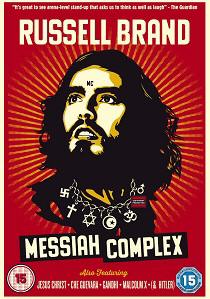 Comedian, actor and author, Russell Brand returns to the BBC with the DVD release of his first-ever stand-up world tour - Messiah Complex - available to own on DVD on 25th November 2013, courtesy of 2entertain.

Russell Brand's sell out global tour began in the US, including dates in the UK and all around Europe, visiting over 20 different countries with a massive 115 shows.

Bringing his unique, out spoken and above all funny observations to his latest stand up show, Russell Brand continues to ask the questions that nobody else does. As the Guardian said in their 4 star review "it's great to see arena-level stand-up that asks us to think as well as laugh".

Recorded live at London's Hammersmith Apollo, Russell questions the value of heroes and leaders. Messiah Complex is a disorder where sufferers think they might be the messiah. Did Jesus have it? What about Che Guevara, Gandhi, Malcolm X and Hitler? All these men have shaped our lives and influenced the way we think. Their images are used to represent ideas that often do not relate to them at all. Would Gandhi be into Apple? Would Che Guevara endorse Madonna? Would Jesus be into Christianity?

He concludes it's all a load of old rubbish and encourages the audience to stop voting, ignore advertising, look to the transcendent within themselves and others.... and kick over some bins on their way home. Plus there's sex. Obviously.

Rob Lowe, Director of Marketing and Product Development, BBC Worldwide says: "We're delighted to be releasing Russell Brand's Messiah Complex on DVD and digital download this November. It's a thought-provoking and hilarious show that features Russell at the very peak of his intellectual and comedic powers".

Brand says: "I dedicate this Messiah Complex tour to the four men that are its subject - Che Guevara, Gandhi, Malcolm X and Jesus- I know this is what they would have wanted. If this is the end of the world I'm going to go out laughing with an erection."

Related Articles
Hospital People: The Complete First Series, Trolls, Despicable Me 2, Rock of Ages, Hop, Despicable Me, The World According To Russell Brand, Get Him to the Greek: The Extended Party Edition, Scandalous: Live at the 02, Bedtime Stories, Forgetting Sarah Marshall, Ballers: Season 4, The Fight
Comments
Hot Pick