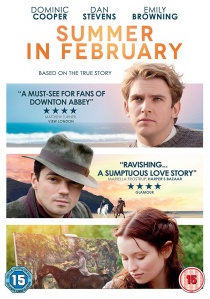 Metrodome Distribution is delighted to announce the forthcoming DVD and Blu-Ray release of Summer In February on 14th October 2013 in the UK and Ireland.

Directed by Christopher Menaul with a screenplay written by Jonathan Smith based on his 1995 novel, Summer In February stars Dan Stevens (Downton Abbey), Dominic Cooper (The Devil's Double), Emily Browning (Sucker Punch) and winner of the Evening Standard and the Critics' Choice Theatre Awards for Best Actress for her performance in the Young Vic's A Doll's House; Harriet Morahan. The film is the intimate, enchanting true story of young, vibrant souls navigating their way through love, passion and friendship in the picturesque landscape of early twentieth century England.

Summer In February focuses on the wild and bohemian Lamorna Group, dominated by the charismatic AI Munnings (Dominic Cooper). The incendiary anti-Modernist Munnings, now regarded as one of Britain's most sought-after artists, is at the heart of the complex love triangle, involving the young aspiring painter Florence Carter-Wood (Emily Browning) and Gilbert Evans (Dan Stevens), the land agent in charge of the Lamorna estate. Renowned painter Laura Knight is played by Hattie Morahan.

True - and deeply moving - the story is played out against the timeless beauty of the Cornish coast, in the far West of England, beyond the reach of London and its stifling conventions.

Related Articles
Marshall, Norman: The Moderate Rise And Tragic Fall Of A New York Fixer, Legion: Season 1, Colossal, Beauty and the Beast, Criminal Activities, Night at the Museum 3: Secret of the Tomb, The Guest, The Man Who Invented Christmas, Beauty and the Beast, The Call of the Wild, Blithe Spirit, The Guest
Stratton, Preacher: Season 2, Preacher: Season 1, Warcraft: The Beginning, Miss You Already, On Angel Wings, Dracula Untold, Need for Speed, Fleming: The Man Who Would Be Bond, Dead Man Down, Abraham Lincoln: Vampire Hunter, The Devil's Double, Captain America: The First Avenger, Tamara Drewe, The Duchess, Mamma Mia! Here We Go Again, The Escape, Preacher: Season 4
Another Mother's Son, The Suspicions of Mr Whicher: Complete, Zen
Mr Holmes, Outnumbered: The Christmas Special, Beauty and the Beast
Comments
Hot Pick

HotDVDBD
From the producers of Nobody and John Wick comes a bare-knuckle, coal-dark holiday action-comedy that says you should always bet on red as Violent Night sledges in on DVD and Blu-ray 6th March 2023 from Warner Home Video. END_OF_DOCUMENT_TOKEN_TO_BE_REPLACED
Top PicksView