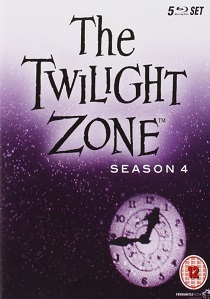 To the delight of fans throughout the UK, Season 4 of the original series of The Twilight Zone hits the shelves on 19th September 2011 from Fremantle Home Entertainment. This timeless classic is available for the first time ever in high-definition Blu-ray, as well as digitally remastered DVD formats.

Season 4 of this iconic series moved from half-hour episodes to eighteen hour-length TV episodes and included appearances by Dennis Hopper (He's Alive) and Robert Duvall (Miniature). Created by the legendary Rod Serling, the multi-Emmy award-winning The Twilight Zone is a true landmark show in television history. It made an indelible mark on popular culture and remains, to this day, one of the most innovative and influential series of all time.

Over the years, The Twilight Zone has been acknowledged as an influence by countless writers and filmmakers, including Steven Spielberg ("I was a complete obsessive-compulsive Twilight Zone follower".), J.J. Abrams ("The Twilight Zone at its best is better than anything else I've ever seen on television".), Joe Dante, John Landis, Wes Craven, George Miller, Clive Barker, Steven King and Michael J. Straczynski.

An essential viewing experience for fans of sci-fi, fantasy and groundbreaking TV drama, these newly remastered editions of The Twilight Zone present Rod Serling's television masterpiece as never seen before. Presented for the first time in the UK, the Blu-ray edition is in pristine high-definition, digitally remastered from new 1080p film transfers using the original camera negatives and magnetic soundtracks.

UHD
The end of the line is only the beginning in a wild, non-stop thrill ride through modern-day Japan as Bullet Train is released on DVD, Blu-ray and 4K UHD 24th October 2022 from Sony Pictures Home Entertainment END_OF_DOCUMENT_TOKEN_TO_BE_REPLACED
Top PicksView