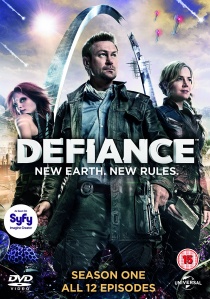 Released on DVD and Blu-ray by Universal Pictures (UK) on 15th July 2013, all 13 episodes from the first season of the US sci-fi drama Defiance follows the attempts of Lawkeeper Joshua Nolan (Grant Bowler) to keep the peace in the futureworld frontier town of Defiance.

In the near future, Earth's landscape has been decimated after years of war with the Votans, an alien race seeking a new home after their own star system was destroyed in a stellar collision. With a ceasefire now in effect, an itinerant Nolan returns to the ruins of his former home town of St. Louis, now known as Defiance, accompanied by his adopted alien daughter Irisa (Stephanie Leonidas), to help keep the former warring factions apart.

The episodes are: Pilot: Part 1, Pilot: Part 2, Down in the Ground Where the Dead Men Go, The Devil in the Dark, A Well Respected Man, The Serpents Egg, Brothers in Arms, Goodbye Blue Sky, I Just Wasnt Made for These Times, If I Ever Leave This World Alive, The Bride Wore Black, Past Is Prologue and Everything Is Broken.

3D-BD
The surviving members of the resistance face the First Order once again, and the legendary conflict between the Jedi and the Sith reaches its peak as Star Wars: The Rise of Skywalker is released on ... END_OF_DOCUMENT_TOKEN_TO_BE_REPLACED
Top PicksView