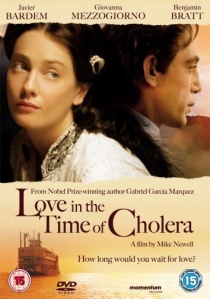 How long would you wait for love? Fifty years, nine months and four days is not too long for love-sick Florentino to wait for his Fermina after they fell in love as at first sight as teenagers and were cruelly wrenched apart only shortly afterwards. Love In The Time Of Cholera, released on retail DVD on 14th July 2008 courtesy of Momentum Pictures, is a story that proves - true love will wait.

Four Weddings and a Funeral director Mike Newell, who also directed Harry Potter and the Goblet of Fire guides the 50-year love story between Florentino and Fermina. After their first passionate encounter, Fermina is forced to leave Florentino with her family by her disapproving father. To the devastation of Florentino, Fermina returns more worldly-wise and marries the wealthy, well-born Dr. Juvenal Urbino instead and so ensues a love triangle lasting half a century.

Without his true love, Florentino tries to repair his shattered heart through work and womanising but to no avail. Leaving a string of broken relationships behind him, Florentino remains devastated by Fermina's rejection. Undeterred, Florentino chooses the seemingly inappropriate venue of Dr. Urbino's funeral to reiterate his undying love to his Fermina over 50 years after the words were first spoken, much to Fermina's disgust. Eventually she relents and admits her true feelings.

Love In The Time Of Cholera is a story that explores every type of love from first love, to marital love and unrequited love and offers first love a belated second chance.

Love In The Time Of Cholera is adapted from a novel of the same title by Nobel Prize- Winning author Gabriel Garcia Marquez. It stars Javier Bardem who won the Academy Award for Best Supporting Actor, Golden Globe, Screen Actors Guild (SAG) Award and British Academy of Film and Television Arts (BAFTA) Award for his performance as Anton Chigurh in No Country for Old Men, Benjamin Bratt (Traffic, Red Planet, Miss Congeniality) and Liev Schreiber (The Manchurian Candidate, The Painted Veil, The Omen). 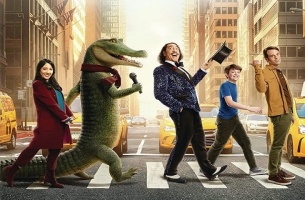