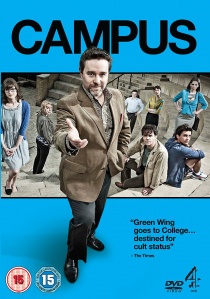 NewsTV SeriesComedy
News Article Go back to homepage
Created by the team behind Green Wing and Smack The Pony, this off the wall new series is a laugh a minute sitcom that you cannot afford to miss! Packed with exclusive, never seen before DVD extras, the hilarious new comedy Campus is out to own on 16th May 2011 from 4DVD.
Andy Nyman, Jonathan Bailey, Sara Pascoe, Lisa Jackson, Dolly Wells, Alison Lintott
Victoria Pile
Murray Peterson, Caroline Leddy, Robert Harley, Fiona McDermott
4DVD
Unknown
16/05/2011
As an Amazon Associate we earn from qualifying purchases
Buy DVD
Information

Campus is a brand new comedy set in the hotbed of academic mediocrity that is Kirke University. At its helm is the stubby, mercurial Vice Chancellor Jonty de Wolfe, who wants nothing more than to drench Kirke in the juices of his own greatness.

As a scary cloud of financial doom hovers over the gently crumbling 60s concrete, Jonty attempts to pimp up Kirke in any way he can, whether it's faked alumni, kidnapped prodigies or a range of "Eau de Kirke" perfumery - but his lofty plans soar as gracefully as a porky tortoise and while the strangely unsettling puppet master plunges deeper into the pickle jar, the rest of Kirke's assorted staff get sidetracked by the more urgent dilemma of who to sleep with next.

The philandering English Professor Matt Beer is forced to up his game in all departments, as he makes no impression on shy Maths lecturer Imogen Moffat, who herself is consumed with creative agony over expectations of a follow-up to her hit Mathsbuster. He is left to contemplate his rapidly greying pubes while his younger, bouncier, athletic student sidekick Flatpack - who combines a six-pack body with the intellect of a piece of Ikea furniture - makes more headway with the lovely maths boffin. The gawky mechanical engineer Lydia 'big shit' Tennant, the three Graces of Admin (Big Grace, Pretty Grace and 'Was Once A Man' Grace), Jason the reticent accountant and Nicole the feisty accommodations officer add more sexual confusion to the mix.

Campus is produced and directed by Victoria Pile (Green Wing) with Associate Producer is Robert Harley and Executive Producer is Caroline Leddy. Campus is available to own on DVD on the 16th of May from 4DVD.