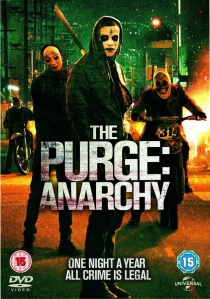 The Purge Anarchy sees the mayhem of the purge, where one night a year, all crime including murder is legal, hit the urban sprawl of Chicago. While some purge for kicks, and some purge for revenge, some, like Shane (Zach Gilford, Devil's Due) and Liz (Kiele Sanchez, Kingdom) just try to survive.

When their car is sabotaged on their way home on the eve of the purge they are left stranded, and are relentlessly stalked as they try to find safety... until their paths cross with a well-armed purger known only as 'Sargeant' (Frank Grillo, Captain America: The Winter Soldier).

UHD
Say the 'B' word three times and have a wonderful Day-O as Tim Burton's Beetlejuice arrives for the first time on 4K UHD 31st August 2020 from Warner Home Video. END_OF_DOCUMENT_TOKEN_TO_BE_REPLACED
Hot PicksView