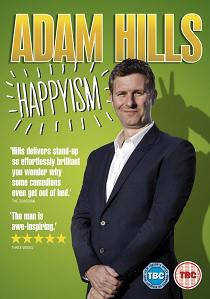 This all new offering from everyone's favorite Antipodean comedian will see him take to the famous Hammersmith Apollo stage for a first class evening of comedy with the usual anecdotes and audience participation all delivered in his refreshingly unique, laid back style.

Hills' charisma and cheekiness licenses him to push the boundaries, whilst discussing taboos such as racism and disabilities to hilarious effect. Allowing us into the world of stardom, he re-encounters jaw-dropping tales of meeting the Dalai Lama (and to his surprise making him laugh!) as well as his excitement at meeting The Muppets. Happyism is not only the title for this eagerly awaited debut UK DVD release but also his newly formed cult religion and is guaranteed to leave you with a more positive outlook to life.

Adam has achieved international acclaim as one of the world's best stand up comics. His combination of positive uplifting comedy and rampant spontaneity has seen him receive numerous awards, glowing reviews and a legion of fans around the planet.

Three times nominated for the prestigious Perrier Award in Edinburgh, Adam's solo shows are established highlights at the Adelaide Fringe, the Melbourne Comedy Festival, and the Edinburgh Fringe, where he regularly sells over 10,000 tickets in the month. He has also been awarded Australia's Helpman Award for Best Comedy Performance, and has received the Best of the Fest, and Forth Fringe Award from Edinburgh Fringe critics.

As the host of the long running Australian music quiz show, Spicks and Specks, Adam Hills was seen by more than 1.2 million people on a weekly basis. He has also hosted his very own chat show on ABC Australia entitled Adam Hills in Gordon St Tonight and subsequently won the 2012 Logie Most Popular Presenter award. His UK TV appearances include Live at the Apollo (BBC 1), Mock The Week (BBC 2), Channel 4's Comedy Gala Live At The 02 2013, The One Show (BBC1), Alan Carr Chatty Man (Channel 4), The Jonathan Ross Show (ITV1) and Never Mind The Buzzcocks (BBC 2).

BD
A 13-year-old girl named Meilin turns into a giant red panda whenever she gets too excited in Disney and Pixar's 25th feature film Turning Red, released on DVD, Blu-ray and 4K UHD 2nd May 2022 from Walt Disney Home ... END_OF_DOCUMENT_TOKEN_TO_BE_REPLACED
Top PicksView