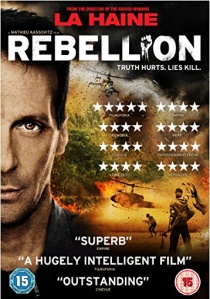 Featuring both thrilling action and intense drama, Rebellion tells the real-life story of a French tribe in New Caledonia who attacked a police precinct taking 30 innocents hostage, as Special Ops officer Captain Philippe Legorjus (Matthieu Kassovitz, Haywire) is tasked with freeing them. A connection is formed between the Captain and lead terrorist Alphonse Dianou (newcomer Iabe Lapacas), but as negotiations become increasingly hostile, it becomes clear that the rebels have nothing to lose and everything to fight for. Against the highly pressured backdrop of presidential elections, the stakes are high and all bets are off...

Directed by lead-actor Mathieu Kassovitz, the film took ten years to translate from initial script to screen, to ensure the families of all the characters honoured the decision to bring this enthralling story to wider recognition. The film is a fierce return to form by Kassovitz who hit the big-time with his acclaimed 1995 directorial debut La Haine. It is made all the more remarkable for much of the cast being residents of Ouvéa and in some cases, family members of the characters.

Boldly captivating, this gritty, powerful action film will introduce you to a tragic story told from the front-line in a way that will raise debate long after it is released on Blu-ray and DVD on 26th August 2013 courtesy of Lionsgate Home Entertainment.