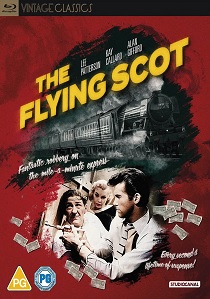 A new 4K restoration of the compact, claustrophobic British B-movie gem directed by Compton Bennett, as three thieves from various walks of life combine forces for a daring attempt to make themselves rich.

Lee Patterson is the man with the audacious plan and Kay Callard his glamorous accomplice in this taut train heist thriller also starring Alan Gifford and Margaret Withers.

Dissatisfied with the small profits gained by his petty crimes, Ronnie Cowan (Patterson) attempts to pull off the most sensational train robbery of all time. After learning that the Bank of Scotland periodically sends half a million pounds in notes from Glasgow to London for destruction aboard the famous passenger train "The Flying Scot", he assembles a trusted transatlantic team and a seemingly fool proof scheme is put into action.

Now available on Blu-ray for the first time, The Flying Scot is released on DVD and Blu-ray 8th August 2022 from StudioCanal as part of their Vintage Classics collection.

HotUHD
After moving to a new town, two brothers discover that the area is a haven for vampires as the classic The Lost Boys is released on 4K UHD 20th September 2022 from Warner Home Video. END_OF_DOCUMENT_TOKEN_TO_BE_REPLACED
Top PicksView