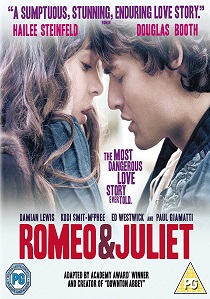 From the creator of the Golden Globe winning series Downton Abbey comes Shakespeare's timeless love story Romeo & Juliet, released by Entertainment in Video on DVD and Blu-Ray on 3rd February 2014. The most passionate and tragic tale of Romeo and his Juliet is captured for a new generation by an all-star lineup, breathing new life into the names of the most famous lovers of all time.

The families of Montague and Capulet use any excuse to publicly fight in the streets of Verona so Romeo and Juliet are dismayed to learn that their new loves are of the rival family. Romeo tries to conspire a way to pursue Juliet without incurring the wrath of his family, while Juliet relies on her nurse to discreetly deliver messages to her love. But the bad blood between the two families is too strong. As the lovers grow more desperate, Friar Laurence attempts to hatch a plan that will allow them to be together forever.

DVD
The end of the line is only the beginning in a wild, non-stop thrill ride through modern-day Japan as Bullet Train is released on DVD, Blu-ray and 4K UHD 24th October 2022 from Sony Pictures Home Entertainment END_OF_DOCUMENT_TOKEN_TO_BE_REPLACED
Top PicksView