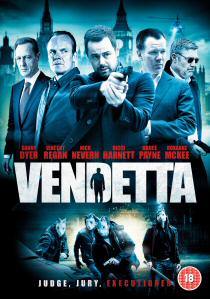 Vendetta, released on DVD and Blu-ray on 23rd December 2013 courtesy of Anchor Bar Home Entertainment, is a hard hitting urban vigilante film set against the backdrop of broken Britain.

Written and directed by Stephen Reynolds (Fall of the Essex Boys). A former Special Forces Interrogator on the run from the military returns home to avenge the murders of his parents. With the police closing in & his old unit on his trail, he has to evade capture long enough to complete his gruesome crusade.