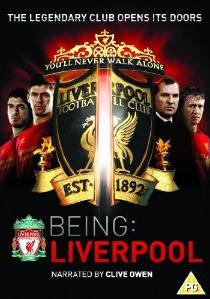 For the first time ever, experience unprecedented access to one of the world's most successful and prestigious football clubs - Liverpool FC with Being: Liverpool, available on DVD from 26th November 2012, courtesy of Twentieth Century Fox Home Entertainment.

A must own DVD for Liverpool fans, this unique and exclusive fly-on-the-wall documentary provides an unparalleled "Access All Anfield" look into exactly what goes on behind the scenes at a Premier League football club, offering a fascinating insight into the club, the players and the management team.

Having been granted unprecedented access to one of the world's oldest and most prestigious clubs, Being: Liverpool is an intriguing six-part documentary following the highs and lows of Liverpool FC as they attempt to recover from their crushing FA cup final defeat at the end of the 2011/12 season and create a newly successful chapter within Liverpool's legendary history.

Will Brendan Rogers, the new 'King of the Kop', be able to raise Liverpool's game in time for the new season? Will the team be able to regain their winning potential and qualify for the European Championships?

Join Liverpool greats such as Steven Gerrard and Jamie Carragher as well as a whole host of other Liverpool FC stars as they reveal the dedication, hard work and sacrifice it takes to never walk alone.

Plus discover even more with exclusive bonus features in the fascinating Being: Liverpool.