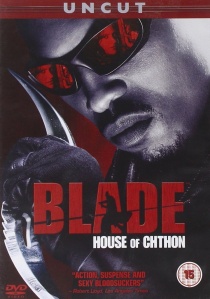 NewsTV SeriesHorror
News Article Go back to homepage
The ultimate vampire hunter is back - and he's badder than ever! Yes, Blade is all set to continue the battle against his immortal bloodsucking enemies in Blade : House of Chthon, which will be available to rent on DVD on 24th September and to buy on 8th October 2007, courtesy of Entertainment In Video.
Larry Poindexter, Neil Jackson, Jessica Gower, Nelson Lee, Jill Wagner, Sticky Fingaz
Norberto Barba, Michael Robison, Félix Enríquez Alcalá, Alex Chapple
David S. Goyer, Matthew Chipera, Avi Arad
Entertainment in Video
Unknown
08/10/2007
Thank you for supporting DVD365.net when you order using the link(s) below. As an Amazon Associate we earn from qualifying purchases
Buy DVD
Information

The ultimate vampire hunter is back - and he's badder than ever! Yes, Blade is all set to continue the battle against his immortal bloodsucking enemies in Blade : House of Chthon, which will be available to rent on DVD on 24th September and to buy on 8th October 2007, courtesy of Entertainment In Video.

Based on the hugely successful Blade trilogy, which has earned more than $400 million worldwide, Blade: House of Chthon is the feature-length, extended pilot of the hit television show, Blade: The Series.

Written by David Goyer, writer of the Blade trilogy, this action-packed production follows Blade, now played by Sticky Fingaz of the infamous rap group Onyx (Dead Presidents, Next Friday, TV's The Shield), a unique half-breed with all of the strengths of the vampire species but none of their weaknesses, in his quest to destroy the entire vampire population and save humanity. He is joined in his mission by the ruthless and beautiful Krista Starr (Jill Wagner - TV's Monk, Stargate: Atlantis), who is searching for the secret truth behind her brother's mysterious murder.

The brutal hunt for the pure bloods continues as the ultimate vampire hunter, Blade (Sticky Fingaz), battles to defeat the House of Chthon, an ancient evil sect of vampires that is growing stronger everyday. Led by the vampire overlord Marcus Van Sciver (Neil Jackson), their ultimate object is to create a vaccine that will give rise to a new breed of super vampires, immune to vampire weaknesses.

In order to stop them, Blade joins forces with the merciless Krista Starr (Jill Wagner), a recently returned Iraqi war veteran whose own brother - Blade's informant - has been slain by Marcus. Marcus infects Krista and turns her into a vampire but just in time, Blade injects her with the same serum that controls his own vampire instincts and the two form a formidable partnership. With the help of both Krista and his trusty sidekick Shen (Nelson Lee), Blade vows to do everything in his considerable power to win this war and save humanity.

UHD
Fast forward to the 1980s as Wonder Woman's next big screen adventure finds her facing a wide array of foes including Max Lord and The Cheetah as Wonder Woman 1984 flies in on Blu-ray and 4K UHD 22nd March 2021 from Warner ... END_OF_DOCUMENT_TOKEN_TO_BE_REPLACED
Top PicksView