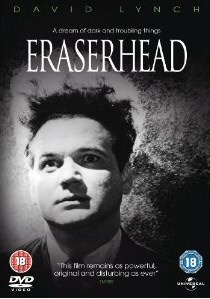 NewsComedyHorrorFantasy
News Article Go back to homepage
David Lynch's first full-length feature film, Eraserhead, released on DVD by Scanbox Entertainment on 20th October 2008, hardly needs any introduction. Having delighted, disturbed and confounded audiences and critics in equal measure during the three decades since its release, it is still regarded by many as David Lynch's most remarkable work.
Laurel Near, Judith Roberts, Jeanne Bates, Allen Joseph, Charlotte Stewart, Jack Nance
David Lynch
Fred Baker, David Lynch
Scanbox Entertainment
1 hour 29 minutes
20/10/2008
Thank you for supporting DVD365.net when you order using the link(s) below. As an Amazon Associate we earn from qualifying purchases
Buy DVD
Information

David Lynch's first full-length feature film, Eraserhead, released on DVD (£19.99) by Scanbox Entertainment on 20th October 2008, hardly needs any introduction. Having delighted, disturbed and confounded audiences and critics in equal measure during the three decades since its release, the film has achieved almost unparalleled cult classic status and is still regarded by many as David Lynch's most remarkable work.

Now, Eraserhead is coming to DVD having undergone a brand new transfer (and, for the first time on UK DVD, presented in a 1.85:1 anamorphic widescreen format) presenting the film exactly as the director wanted home audiences to see it. For this DVD release version, Lynch personally underwent the painstaking process of cleaning, restoring and remastering the film frame-by-frame in order to 'obtain the best image and sound quality possible'.

Jack Nance (credited as John) stars as Henry Spencer, a young man living in a dilapidated apartment located in a sordid industrial town polluted by steam, smoke and noise. When his girlfriend, Mary X (Charlotte Stewart), gives birth to their illegitimate and freakishly premature, quasi-foetus child, Henry takes them both in. But their domestic situation soon proves to be too much for Mary, who leaves Henry to care for the 'baby' on his own.

A disturbing surrealist fantasy combing elements of horror and black comedy Eraserhead is a truly unique cinematic experience that is open to many interpretations and virtually defies description. Only one thing is certain, over 30 years on, Lynch's acclaimed classic still retains the power to shock, astonish and entertain.

DVD
In Brian And Charles, released on DVD and Blu-ray 10th October 2022 from Mediumrare, an inventor lives alone in a remote village in the countryside, inventing useless things out of found objects in his garage. That is until ... END_OF_DOCUMENT_TOKEN_TO_BE_REPLACED
Top PicksView